This is a story about a host of metaphysical forces all meeting in a single moment of time with a painful result.

It was in that moment when my client, Maree, fell and broke her ankle.

It was the 22nd August 2015. Maree, a woman in her sixties was about to put her washing on the line.

She was in the final moments of finishing up the chores she had to do before leaving to catch a bus that would take her into the city to meet friends for lunch.

To set the scene for you…..

Her home is an old heritage, stone cottage, built in period 4 facing Northeast (Kun) at 46 degrees in a beautiful forested outer suburb of Melbourne, Warrandyte. Maree ( not her real name) lives there with her husband and daughter.

The house nestles into a hill, on a slope where the top floor is level with land that has been flattened at the back of the house. To reach the clothes line she needed to cross over a little wooden bridge leading from an upstairs hall and door.  There is a small step off the end of the bridge onto the ground.

Here is the layout of her upstairs floor with the bridge and the spot where she fell, marked with a cross. 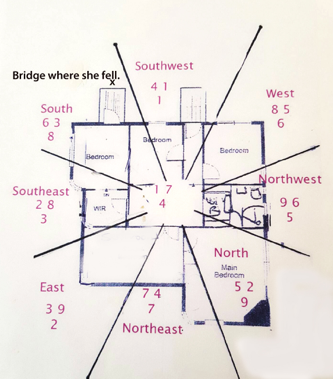 She was walking over the bridge, got to the end and missed the step, snapping her ankle in two places at 9. 30am.

When I looked at her own Bazi, the Bazi of the 22nd August, her Flying Stars, her Monthly Stars, daily and annual stars, the Tai Sui and her own mental state on that morning, I could see how they all played a role in breaking that ankle.

It was Heaven, Earth and Man painfully colliding.

Layer upon layer of Metal, Wood and Fire are the main players here.

In her Bazi, she has a strong Earth chart with her favourable elements being Metal, Water and Wood. But the Wood in her chart is very, very weak.

In her current Luck pillar, however, she has a Gui Mao ( Yin Water Rabbit)  providing her with her only effective Wood.

In her everyday life she has intuitively brought in Wood by living in a forested environment, working with herbs and being a passionate gardener.

But on that day, it just wasn’t enough

THE STATE OF HER BODY AND MIND

Now let’s look at her state of mind when this accident happened.

One of the women in her lunch group was a ‘friend’  with whom she’d travelled in the past but the experience had not been good.   She was reluctant to meet up with her again.

She also was thinking about having to catch a bus and needed to get ready quickly to get to the bus stop on time.

She was annoyed that the door she usually used to go out to the clothes line, in the Southwest, wasn’t working properly, so she had to use the alternate door.

With this on her mind she stepped off the bridge and lost her balance. Where she stepped is so close, if not actually into the 15 degrees of the Tai Sui (202- 217 degrees) that I believe that it would have had an impact. The Tai Sui of 2015, the Goat, clashed with the Ox of her day Pillar.

But most interestingly, that very month, August, she had received a results of a test ordered by her naturopath, revealing a very high level of aluminium and nickel in her body.  Warrandyte was a mining town until the 1960s.  In fact it was one of the areas which attracted gold miners from 1851 onwards  and the ruins of mineshafts and tunnels can still be found throughout the Warrandyte State Park.  The stone from the area was used extensively in her cottage.

The metals in her body are thought to have derived from the soil and the rocks in her house. They are responsible for depleting her body of calcium, and also for repressing the uptake of zinc. Zinc is vital for the immune system, cell health and our hormones and moods.

As if this wasn’t enough to lead to an accident, her Bazi and Flying stars added to the picture of that day in quite a fascinating way

Before I do that let me first explain that even though 2015 was the year of the Yin Wood Goat, Maree hadn’t yet had her birthday. So for her in a personal sense, the prevailing influences were still those of Jia Wu the yang Wood Horse of 2014.

The Jia, combined with Ji, her yin Earth Day Master, to produce Wu, yang Earth, removing a favourable source of Wood and  strengthening the Metal stem of her Hour Pillar.

The Hour Pillar is the point of interest here because it not only represents her age of 60 plus, it is also associated with the lower part of the body, from the hips to the feet, including the ankle; all Wood parts of the body.

August 2015 was a Jia Shen yang Wood Monkey month. This Wood also bonds with her Ji,  to produce Earth again. The Metal of the Monkey of August is then strengthened by this Earth stem.

The day of the accident the 22nd August was a Geng Wu day, yang Metal Horse.  But so is the Hour Pillar of her natal chart! Two Geng Wu!   That’s a lot of Fire and a lot of Metal, clashing.

Fire is unfavourable for her. It is her Resources and when Resources is strong in a strong chart, it has the effect of ‘pulling the carpet from under us’. In her case, almost literally.

The Hour of the accident was a Xin Si yin Metal Snake. The Snake merges with her Ox, and also with Xin, the Rooster, producing…yes you guessed it, strong Metal.

Maree’s current Luck Pillar is Gui Mao, yin Water Rabbit,  giving her a favourable Luck pillar,  but the only Wood on the scene. The Gui Water is weakened by its clash with the strong Fire of the Horses of the year, the day and her Hour Pillar, and this would have removed the supporting bridge of Water between her Metal and her Wood.  She was left exposed to be attacked with mighty force by Metal.

Gui is associated with the foot, perhaps explaining why it was the ankle that broke and not another part of her leg.

Turning to Chinese Medicine, we find that there are quite a few meridians that begin in the foot.  Maree broke her right ankle in two places, the inside, which is on a kidney, spleen and liver meridian and the outside, which is on the gall bladder meridian.  The liver and gall bladder are Wood organs, the kidney is Water and the spleen is Earth. It is not surprising that the Wood elements predominate in the break.

As if all this isn’t enough the Flying Stars also played a crucial role.

Her house faces  46 degrees Northeast and belongs to Period 4.  Maree’s accident occurred in the South Palace. Yes another Horse and more Fire!

The Stars in the South sector for Period 4 are Metal, Earth and Wood 6-8-3.  This combination of 6 MS and 3 Ws indicates health issues including accidental injury to the leg.

The Metal of this palace is strengthened by the rock and earth of the land on which the house is built.  The 3 Wood water star is also weakened by the Fire of the South as well as the attack from the 6 Metal mountain star.

Her own Ming Gua is 3 Wood. Remember, she was already seriously weakened on that particular day with the high content of aluminium and nickel in her body, depleting her Wood.

I was astonished when I looked even further.

What hope did she have?

Her Bazi Hour Pillar consisted of strong Metal in a clash with strong Fire, which, due to her age, took place in the pillar associated with the lower part of her body.

The accident happened at home  in Li, the South palace, a Fire Gua , with Flyign Stars representing Metal attacking Wood in a year of Metal, an hour of Metal and day of 5 yellow Earth associated with accidents.

It happened in a moment of time when her own mental alertness and personal power from Wood was not strong and she could not protect herself.

What could have been done to prevent it? That remains a mystery.